As found in a pot inside my home 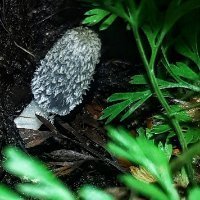 By Adriaan,
November 15 in Identifying Mushrooms